The end of 2017 was marked with a scandal that broke the internet. Something more extraordinary than Kim Kardashians ‘champagne butt’ photo, in that, YouTube star and celebrity Logan Paul posted a video exploring the infamous Aokigahara forest with friends as part of his Japan tour. It colloquially known as the ‘suicide forest’ as an infamous destination for the many people who sadly end their lives here. Whilst exploring the forest, Logan Paul and his friends came across a recently–deceased man hanging from a tree. This grim discovery takes a turn for the worse, as Paul insensitively discusses the subject of suicide. He is shown clearly mocking the situation, laughing and joking about the situation with his friends. This comes back to haunt him, as invalidates his initial claims of promoting ‘suicide awareness’. Prior the video’s removal on YouTube⎯not under YouTube’s community guidelines, but from Logan himself⎯it had several million views. There was immediate wave of international condemnation, which not only severely damaged Logan Paul’s career as a YouTuber, but, also, started discussions on a very serious subject: the spreading of graphic content on social media. As for Logan Paul’s YouTube video, it is only the most recent of many controversies on the irresponsible spread of graphic content by the media.

One of Sweden’s biggest tabloids, Aftonbladet, recently published an article about a phenomenon that seemingly has become a growing issue; especially in cases when police officers, firefighters and ambulance workers arrive at the scene of emergency. The Stockholm terror attack is a prime example of a recent phenomenon; where the behaviour of a significant amount of the people witnessing a traumatic event can only be described as disturbing. Normally, when a threatening/and or dangerous event occurs, humans respond to this instinctively by choosing the either options of: Fight or flight. Recently, however, another response to catastrophe is capturing the event, whether that may be through photography or video. Emergency events are no longer personal but can be spread through social media for all to see.

During the Stockholm terror attack, victims lied on the ground severely injured, whilst crowds of people started to film and take photographs of them, instead of assisting them. It was even reported that some had taken selfies while at the crime scene, as one takes photos on holiday to show off their experience. Most disturbing of all was the fact a police officer had to forcefully request a blanket to cover a deceased victim who was being photographed by the surrounding crowd. Despite efforts to ensure the victim’s dignity, floods of graphic images from the crime scene were circulated to different social media platforms.

Some might defend the spreading of graphic content as a way of raising awareness for subjects we find it difficult to talk about. Logan Paul defended his video by claiming that he posted it to spread awareness about suicide. When several newspapers in Sweden had the picture of Alan Kurdi, a five-year old refugee who had drowned in the Mediterranean. The extremely graphic image was justified as a way of creating sympathy for the scale and devastating impact of the European migrant crisis. Both of these events were highly criticised as disrespectful to the deceased and for propagating graphic content that was disturbing to see. Graphic content has also been used by political groups to sway public opinion into supporting their political views. Notably, images from the Stockholm terror attack have been twisted and misinterpreted by right wing populists to advocate for more restrictive immigration policies.

This recent incarnation of social media behaviour can be examined through different lens, which may allow us to understand why it occurs. The most obvious being that it is extremely disrespectful. The idea of death to most humans is frightening, and to many, bereavement is the one of the nadirs of human experience. Therefore, it is horrific to imagine that a photo or video is widely available and distributed for strangers to peruse at their behest, yet this graphic content is often exploited.

Another issue of this phenomenon is that the graphic content is distributed recklessly and widely available to anyone, to the extent that it can be inescapable. With the likes of Logan Paul, whose target audience consists primarily of young teenagers, one would expect that an influencer with young viewers to be more responsible. This, however, seems unsurprising considering the desensitisation of violence in media. It can be exceedingly difficult to monitor and filter graphic content, as there are limited systematic controls to ensure that children don’t see problematic content.

This desensitisation to violence also rears its ugly head when victims captured on photographs and video are used as a ‘political football’.  They become a tool for someone’s ideology, and they lose their agency: essentially, they are dehumanised.

There is hope, however, as during = the beginning of 2018, a new legislation was introduced in Sweden. The law, known as the “unlawful violation of integrity” made it criminal to graphic content of other individuals online––without their explicit consent. It is effective in being multi-faceted. As it both tackles the issue of victims of graphic bodily harm (as those in terror events, accidents and disasters), as well as graphic sexual content in the form of ‘revenge porn’. Whilst this is a step in the right direction, there is still much ground to cover. Legislation might help with criminally sanctioning acts that disrespect a person’s integrity and dignity. We must ask ourselves, however, how can we stop dehumanising others? We need to examine the human psychology thoroughly, as we need to realise that behind every graphic post, there will be someone suffering. From a young age, we are all encouraged to show empathy towards others. I believe it is time to understand that this also applies to our behaviour online. 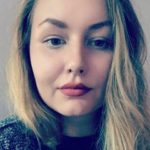 Sandra (24) took part in the “My Europe” Workshop in Stockholm in 2014. She is a Juristprogrammet, Master of Laws student at Stockholm University and in her free time Sandra enjoys reading, meeting her friends, travelling and watching documentaries.