Over the last few thousand years, ever since the dawn of the first civilizations, our ancestors were desperately craving for an explanation  of their surroundings and macrocosm (1).To do so, they had created an innumerable amount of gods in order to satisfy their need for order and security. This has left a great mark on our history and from their creation and survival, nowadays beliefs have emerged to become worldwide dominant religions. This itself, has shaped and developed the way we understand the world and the people around us. We see how these changes have affected us, but the bigger question is- how it will affect us in the future…

According to a research made in 2015 about self-described religious/non-religious perception in the European Union, 71.6% of the people consider themselves Christians, non-believers/Agnosticism makes for about 13.6% on the statistic; Atheism takes 10.4% while Islam is about 1.8% and other religions- 2.6% ( the statistic has been taken from an Eurobarometer survey (2) made in 2012).Having these religions and convictions on the territory of our prosperous EU, today’s society has been greatly influenced in more ways than one- art, music, culture, law and even cuisine are all due to people’s perception, projected through their belief system or in other words-religion.

However, before making any assumptions about the dominant faith in the Union, that is, of course Christianity, we ought to take into account the refugee crisis happening in this very moment with its main mindset- Islam. Bringing these people on European lands and having them crossing our borders, there is no doubt, and I truly believe it, that in 10 years or so, there will be upcoming changes in the jurisprudence system, dress code and ultimately- in our every-day-life and hopefully, these changes will be for the better!

There are two kinds of these people, entering our alliance- the ones who are trying to escape the horrors and nightmares of war and those so called ”economic immigrants’’. Now the question is- how are we supposed to help hundreds of thousands of people, flooding across our borders with their families, belongings and hopes for a better life, seeking peace and safety , because it directly concerns religion, but before we answer that, we have to completely examine the situation- in fact, more and more refugees are actually economic immigrants, seeking the benefits and utility of our European Union’s social help services -”According to the available statistical data, at the end of the third quarter of 2017, authorities in Bulgaria, Greece, Italy, Spain and Cyprus registered 146,287 newly arrived migrants – less than half of the total arrivals recorded by the end of September 2016 (322,299). Overall decrease is mainly due to the significant drop in arrivals through the Eastern Mediterranean route, namely Bulgaria and Greece (96% and 86% respectively). However, when analysed closely, these two countries have rather diverse monthly and quarterly dynamic in arrivals between 2016 and 2017.” (The information is taken from The Migration Flows to Europe, provided by the UN Migration Agency (3)).And even though most of the the people are the victims of these tragic events, there is still this percentage of them, whose intentions were, initially and still are, fully profitable.

We seek co-operation. It is obvious that we have to show empathy for the terrors most of these people had to endure, because it is not only our moral right, but also- our human obligation. However, the process works in both ways and they will also have to show respect and regard for the way we choose to live by or in other words- make some adjustments to their characters in order to improve themselves if they are planning to stay, study, work and live here. If they are the victims, trying to escape the terror and chaos they were made to endure, aren’t they the ones to be understandable and happy we have offered them safety? A society that prohibits its women from working and voting does not correspond with our understanding of values and human rights. Such mindset should not be allowed on our territory. You see , these people have to help themselves first, so that we can help them subsequently.

Due to our millennial- long religious and traditional differences, I propose- and this is possibly the best solution for the ongoing crisis- integration, and to be more specific- the integration of these people into our social, political and economic sphere. Integrating them in our educational system in order to learn the language, traditions and history of the country, in which they want to stay into; integrating them into our economic system, so that they can assist and supply the state’s economic sectors ( primary, secondary and tertiary ), but also those of the EU’s as well and lastly- integrating them into our law and political system, when of course, they meet the requirements and are fully aware and qualified for the position on which they will be applying for. In other words – they will have to adjust themselves to our political and juridical system in order to not only vote , but to also represent themselves if they happen to participate in a political election. In this way, we shall make these people fully authorized citizens on the territory of our European Union and prepare them for the future – a future which they will be ready for.

Without a doubt, not everyone will agree or even try to acknowledge the positive side of these transitions, because xenophobia or simple antipathy are not uncommon, but what people must realize, is for without these changes, I fear that racial and ethnical tension and cultural collision with the local population will be inevitable. Moreover, according to the EU Law system – ”Discrimination on the basis of religion is strictly prohibited under European law”. This is maybe one of the biggest and greatest challenges the European Union has faced up to in 21st century, concerning the belief system of all European

As I said, our society has been enormously influenced by the belief and moral systems of all the people, working and living under the protection of the EU. We might all be different, that including gender, race, nationality, ethnicity etc. and believe in different projections of God, including me too, but there is one thing that we all have in common- our human passion, which unites and bonds us together. We cannot stop change- it’s in the natural order of things to not be at one state and to alter, but it is upon us and only us not only to make these changes for the better of our Union, but to also ensure the well-being of the future generations that are yet to be born. Jesus was not a Christian, Mohammad was not a Muslim and Buddha- not a Buddhist. They were teachers who taught love and respect. Love was their religion.

Compassion, peace and tolerance are essentially what a religion has to stand for, in order for us to accept it- among our hearts and ourselves, and we must not stand for anything else, rather than these values. Religion has helped and guided us throughout our history and in our darkest times and there is no reason to believe that this won’t continue in the future. As a great man (4) once said- ”We are not enemies, but friends. We must not be enemies. Though passion may have strained, it must not break our bonds of affection. The mystic chords of memory will swell again when touched, as surely they will be, by the better angels of our nature”. 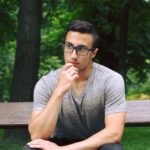 Radoslav Stefanov (17) goes to high school in Sofia. He is a member of the Working Group Religion. He likes to study languages, especially English and Spanish, and recently started learning Hebrew too. Whenever he has free time he goes to the gym, as his life motto is ‘A sound mind in a sound boudy’.