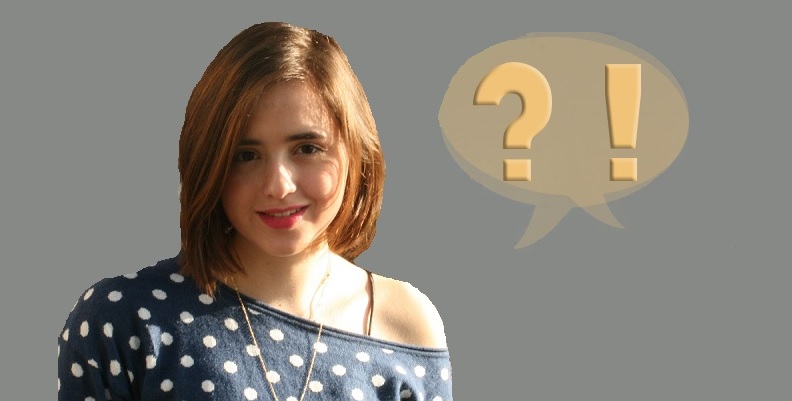 My name is Selina and I attend the local grammar school. I have conducted an interview with Jeannie. Jeannie is in her last year before graduation and took on the difficult and challenging task of setting up and teaching her very own class.

Most of us are already overwhelmed by the enormous amounts of exams, additional courses, presentations and reading we have to do in order to successfully master the high level of education we are thankfully receiving. But not Jeannie, who is not only an impeccable pupil but also extensively engages in Swiss politics and now decided to pass on her knowledge by teaching her self-established extra curricular class.

The idea behind it all is extraordinarily simple but unique: Jeannie’s subject is called “Think Tank” and focuses on current events worldwide, news issues, political elections and generically speaking Swiss politics. The aim of the course is to spark discussions between the students, improve our general knowledge and grasp the news of the world.

Surprisingly enough it’s the first of its kind at our school and in my opinion it was high time us students were provided with such a platform, for the demand was numerous.

As part of the student body in her class I acquired a broad spectrum of mainly political but also economical, cultural and social inputs.

Selina: How and why did you come up with the idea to offer a subject at our school?

Jeannie: I’ve always been interested in politics, and then I was given the chance to join the “Youth Council for the Future” and after the “Get2Gather” weekend I spent in Frankfurt in 2013, I was so excited to know that there were young people all over Europe, also interested in politics, dedicated, and so eager to wanting to change something. That’s I came back to school and I was hit by reality; not a lot of people know what goes on in the world, especially young people at my school. But it’s probably not because they’re not interested, but because they don’t have access to newspapers and the necessary information. Then I asked Mr. Aegeter (a history teacher at the school) if there is was possibility of having some sort of discussions at our school and he was very enthusiastic about it and further encouraged me. He helped me to realize the project and it all worked out thanks to his approval. How I got the idea is simple; it makes me sad to see young people just concerned about going out and all the superficiality, they really don’t know how things work. Especially in Zurich we have this huge historical background of the Eighties where all the rebellions and riots of teenagers ruled the city and I asked myself what had changed since then. That is why I tried to offer something from my perspective as a teenager to peers.

Selina: I see. How did you prepare for the individual lessons?

Jeannie: First of all I had to come up with a topic, which had to be interesting and topical, and I really tried to link it with the visitors we had. Young representatives from all major Swiss political parties came to introduce their political viewpoints. With that I tried to present a political subject which is also on their respective political agenda to further talk about in class to evoke a debate and encourage discussions. For example in of the first lessons we dealt with the IS, a matter unfortunately very relevant, where we read a recently published article. I tried to always read the newspaper and if I saw something I could possibly bring in, I took it with me, I researched, I read books and I think in that aspect it was like a normal teacher prepares his/her lessons.

Selina: Exactly. So what did you expect from your students? And did they meet your expectations?

Jeannie: Naturally, I was really curious, because I didn’t know at all how they would react and I was so positively surprised. For instance, sometimes when I struggled, when I wasn’t that well prepared or things were really difficult to explain or understand, they patiently listened and were attentive. Or sometimes I thought for sure the topic we were talking about lacked interestingness and I looked at their faces and they were still looking at me, following me and that overall was such a good positive feedback. Therefore I had solely good experiences with my students, which has ever since also encouraged me, it isn’t really the teenager’s disinterest it is more a question of how to get to the information.

Selina: What was your goal to teach the students?

Jeannie: My goal was to give them some sort of an idea and also to show that politics and world conflicts aren’t all that complicated, it just appears to be complicated and complex because doctors and professionals are always talking in shop language, using conceited and pretentious words. They have so much knowledge but it’s really not that difficult. That was my goal; to show you don’t have to be highly intelligent to be interested.

Selina: And did you achieve this goal?

Jeannie smiles: I hope so, well that is maybe a question for you to answer

Selina thinks: (Jeannie certainly achieved her goal. To this day I remain in disbelieve and great respect for what she has taught us as a teacher, as well as a student, carrying out both roles with excellent bravery.)

Selina: So as you said you’ve had a very positive experience with your “Freifach”. Would you therefore recommend other students to follow your example?

Jeannie: Yes of course, it’s a great experience! It also comes with a lot of work, but it is very rewarding. You know, if you do it like I did, with lots of visitors, you don’t have to prepare as many lessons all on your own. It admittedly needs a certain amount of courage; to stand in front of other people is not what everybody is used to or likes to. But I was reassured because, as you know I’m also an activist at the young socialists and there it’s essential to be able to give speeches. Plus, I know that the system of students teaching students works very well. Nevertheless maybe if somebody isn’t courageous enough to do it all by himself it is helpful to do it in a collective, as a small group or with a slightly varied structure, to perhaps have a weakly read of the newspaper together or similar.

Selina: Would you propose to do introduce analog classes or projects all around Europe, perhaps even as mandatory classes?

Jeannie: Definitely, it is, in Switzerland especially important because we vote almost every month and that’s why it is essential that we are educated about complex issues in our country and the world generally. For example: often times you see a commercial advertising this or that and you think it’s straightforward, but the ambiguity lies much deeper. The causes, and also the solutions aren’t just easy. For that reason it’s useful to have a broad knowledge of what’s going on around you. I firmly believe it would be in every school’s interest to have student discussions and the like.

Selina: Do you want to go further with your teaching; would you like to continue it?

Jeannie: I don’t know. To be honest teacher is not the occupation I am aiming for, but I truly enjoyed the experience and maybe I’ll get back to it in the far away future. It is always something to keep in mind.

Selina: What are your plans for the future then?

Jeannie: I find that the world as of right now, is an extremely unfair and unjust place and maybe it’s naïve but right now, If I could choose, I would like to work with NGO’s and go into politics to try to change the world because I think it is just too easy to say “well I don’t care about all those things!” I want to stay in current affairs and politics for the time being.

Selina: Hence I take it you want to have a political impact, do you have a message for Europe’s politicians?

Jeannie: Referring back to the young people, the youth, it’s to provide them with information and educate them and to encourage them to get informed. Unfortunately it’s the characteristics of our generation to go through life narrow-minded and stuck in our “bubbles”. We are used to this luxury of having it all, we can’t imagine not to maintain the present wealth and opulence. That’s not how it can work, I mean if everything is fine, you can live in your bubble but one day when the façade starts to crumble, you really have to start to make up your mind and start to think for yourself. We are at a point right now where we are in a crisis and that’s why it’s so important to involve the youth in politics.

Jeannie and Selina go to the local grammar school in Zurich. Jeannie (18) participated in the “My Europe” Workshop in Zurich in 2013. More