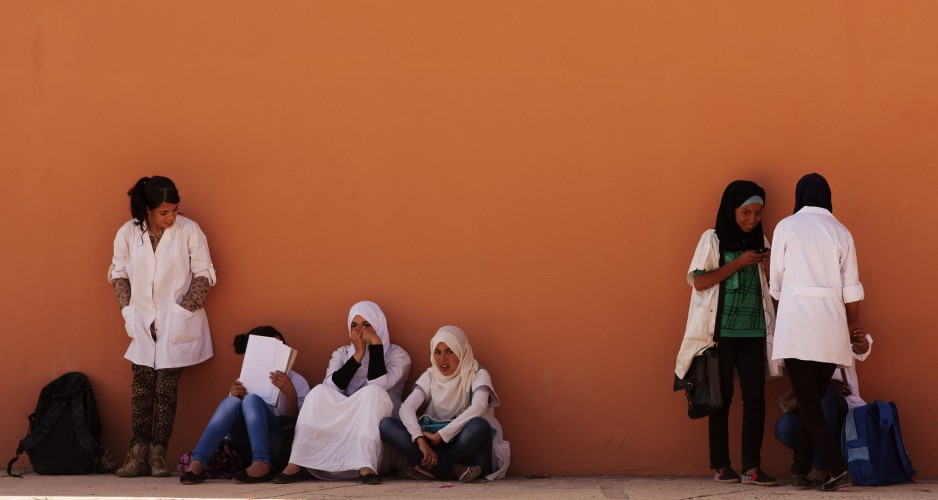 In the last few decades an interesting development has been coming its way in Islamic states all over the world. The women are taking hold of their voice and making it louder than ever before. They are fighting for their rights, which they aren’t only entitled to according to human rights laws but apparently also according to the Koran.

Recently I was invited to a podium discussion in the Ministry for Europe, Integration and Foreign Affairs in Austria on the topic of Women in Islamic states. A week before I had received an unexpected invitation in consequence to an interview that I gave in the Frankfurter Allgemeine Zeitung. I had criticized the Austrian government’s way to deal with the issue of the integration of foreigners and believe that the invitation was a way of showing me the opposite.

The occasion for the discussion was the successful conclusion of a training organized by the Ministry for female commissioners from Islamic cultures. These women are playing the role as “multiplicators” of the Islamic cultures, as they call themselves and are using their time in Austria not only to build functioning Muslim communities in Austria but also to develop connections to the Austrian government. The main ambition for the training, which the women also agree with, is the dissolution of stereotypes and extremism. Both sides are slowly coming together on one and are working on a “dialogue of cultures”.

In advance to the distribution of certificates to the participants of the training, the basis for the later following discussion was laid. A couple of people spoke about the general idea of the project and the problems it is supposed to fight.

They were very honest and admitted that the Muslim society is in a crisis right now. Instead of accusing others they say they want to solve their problems on their own and this training is one of the many initiatives to enforce this movement. Another point that was often made was that Muslims are becoming more self-critical, because if they are not critical of themselves others will be and in consequence prejudices will never come to an end. In recent years these ideas are supposed to be spread also by female commissioners in many European countries.

To enforce this movement the first congress for women “congrès international féminin pour une culture du paix” took place in Algeria with the motto: The word to the woman. Two participants of the congress were present at the discussion I attended and gave an overview over the themes and ideas raised. The conviction that was at heart of it is that the woman is the sole educator of the children and therefore the sole educator of the entire society. Taking this idea further these Muslim women are convinced that the woman is therefore the one in charge of the transmission of religion and freedom.

The congress focused on the main question of how freedom could be established and preserved in the world, with women as the starting point. On the path to solution, all 2000 participants from all over the world took part in workshops or discussions, visited exhibitions or other cultural events. In the course of these the main ambition was to reflect on femininity and the freedom culture from different aspects.

Femininity in context with ethics and education: The establishment of the pedagogy of freedom, the idea is to establish lessons on freedom in schools as it is already the case in a part of Switzerland with the project “grains the paix”.

Femininity in context with religion and modernism: In recent years in many parts of the world, religion has been losing its importance in society and was replaced by the trend of novelty and modernism. Precisely these two contrasts are beginning to be unified now. The goal is for religion to put a brake on the intensity of modernism for the good of humanity.

Feminist interpretations of the Koran: A trend has been coming up in Islamic states among women to reinterpret the Koran. These feminists and secular feminists, as they call themselves, want to reconquer their role in Muslim society. Apparently during the time of the prophet Mohammed women were the centre of society. They were present at all official occasions and their opinion was often valued more than men’s. Only after the death of Mohammed did the men change this perception and limited women’s rights to their advantage. The emerging feminists now want to bring back the rights they had during that time. Still, they remain very religious and bound to the Koran. The only way to change the perception of women is to change the perception of the holy book. Many women are spending their lives reinterpreting different passages to show the world that the Koran is indeed not sexist but actually in favor of the domination of women.

The proposed solution to attain freedom is to practice spirituality and love. They said this can be achieved by loving yourself first and then the people next to you. This idea has already been making its round in many countries where one can now see a trend in the detachment from the mere study of the Koran to an actual life according to it.

Do you think these movements in Muslim society could change the way Muslims are perceived among other nations? Especially in these times of international unrest, so many people say this is caused solely by Islamic radicals, do you think if one spreads the messages presented, one could erase the prejudices?

Smaranda (16) is a member of the Youth Council for the Future. She participated at the “My Europe” workshop in Vienna in 2013.